Using "Originality" To Spot & Seize Opportunities Ahead Of Your Competition. | S5. Ep. 2 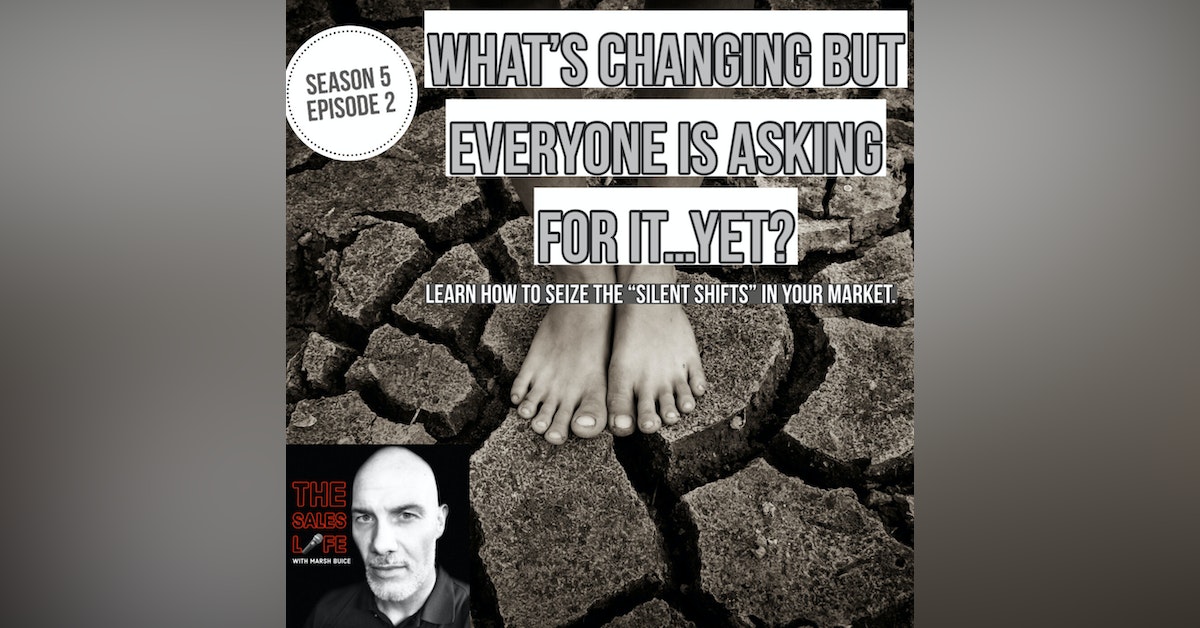 Instead of waiting for mass adoption before changing, why not pepper in some originality in your day?

There's a difference between "original" & "originality."

You have "original" down pat. Every day is a carbon copy of the day before, but what if you looked beyond today & begin to dabble in the "silent shifts." Silent shifts are habits, tendencies, and ways of doing business that is way out there, yet the market hasn't reacted to it yet.

Most people "wait & see." Today you'll see and experiment; even if it fails, all it cost you is a little time.

Selling is more than a profession; it is the #1 LIFE skill. Great salespeople have learned to embrace uncertainty, handle adversity, and beat complacency using 5 core skills to be RFA (Ready For Anything.) Those 5 skills are Communication, Curiosity, Creativity, Continuous learning & action, and Productive Confrontation.

You don't have to be in sales to learn how to sell. I'll show you how I've applied these to every area of my life & you can too. Join marshbuice.com today.

Do you want to be the one to come up with the next big idea what's right there in front of you? And today I'm gonna show you how to take advantage of those. This is the sales life. I'm your host, Marsh B and I created the sales life because I believe the number one skill that you need in your life is the ability to sell, but you don't have to be in sales to learn how to sell. There are five skills that the best sales people use to embrace uncertainty, handle adversity, and be back complacency. They're able to communicate, they're curious, they're creative, they're continuous learners, and they apply what they learn and they confront, but productively. They're not just gonna sit back and take it That way they're ready for anything because they still have to produce. Sales is all commission. So is life and the good news is all of these skills are within now. I'll help you develop 'em, so you'll never go without. So there's original and then there's originality. Original. Think Coca-Cola tried and true, and then there's originality. Think Airbnb early on that disrupted the hotel industry. Think Uber early on that disrupted the taxi industry. Nobody even saw these things. And so you've got original down pat. Pretty much every single day is a carbon copy of Original over and over and over again. But how much originality do you have peppered into your day? And originality are things that are happening way out there. They're pulses, They're what I call silent shifts, and they're starting to take form, yet are so faint, nobody's even asking for it. And if you'll learn to spot these and start working on these areas, Just a little bit. You're gonna have a huge advantage over everybody else. And what's good about this is when you start working on these, they're so low consequence and they cost little to nothing, that even if they fail, The only thing that cost you was a little bit of time, but sometimes the failure sets you up for future success. It was important that you failed right here in order to get to there. So start to question what is happening out there on the outer banks that no one's taken advantage of? Are you starting to see that buyers' habits are changing now right here, way out there? Are there pieces of technology that are available that you can cobble together? To improve not only the efficiencies of your business, but also to capitalize on more business. What are some things that customers wish for yet no one is providing? Is there a fragment of that, that you can start pulling into the equation? It's not a finished product, but it's a little bit better than what they already have. It's like a little bit of yeast of success. You just sprinkle just a little bit and all of a sudden it starts taking a life of its own. Don't wait for a finished product and then react. That's what 99 out of a hundred people do. They wait until something's there and like, Oh, okay, well we gotta jump on that. Notice it way out there and just start working on it. In his book, The Innovation Stack, that's what Jim McElvy did. Jim McElvy invented Square, and that was the credit card processor that you plug into your phone and you swipe the card. Well, when he came up with the concept, the technology wasn't advanced enough on the phones to be able to accept his idea, so he didn't shut it down because it wasn't available. He worked within what he calls the horizon of possibility, meaning that he worked on the things that he could work on until the future intersected with the present, and when it did, he plugged it in for success. So what are some things that you can start taking advantage of right now that are way out there? Just start working in those things just a little bit. And where you have a hundred percent original, take 10% and work on originality. The 90% you need, right? It's tried and true. It's a paycheck. You can't just burn the boats. But the 10% man, you can scrape off. You're still very productive, very successful here, but you're working on future innovations, future tendencies, future shifts. You're working on that 10%, and as you keep working on that, it's not like you're gonna pull more resources from the 90% original. What's gonna happen is as you work on that 10% of originality, that 10% goes the 20 goes to 40, and eventually goes to 100. Then you have to make a decision because you got two entities, Then you got your original, and then you have your originality. Do I sell off the originality or do I keep it and let the original go and start working in on this? That said, decision only you can make, but at least. It's a good option to have. All right, let's get outta here. Thanks for being a part of the sales life for more on the sales life. Go to marshbuice.com that's M a R S H B U I C E. Be sure and subscribe to not miss any future episodes. Remember the greatest sale that you will ever make is the sale you own you because you're more than enough. Stay amazing. Stay in the sales life.