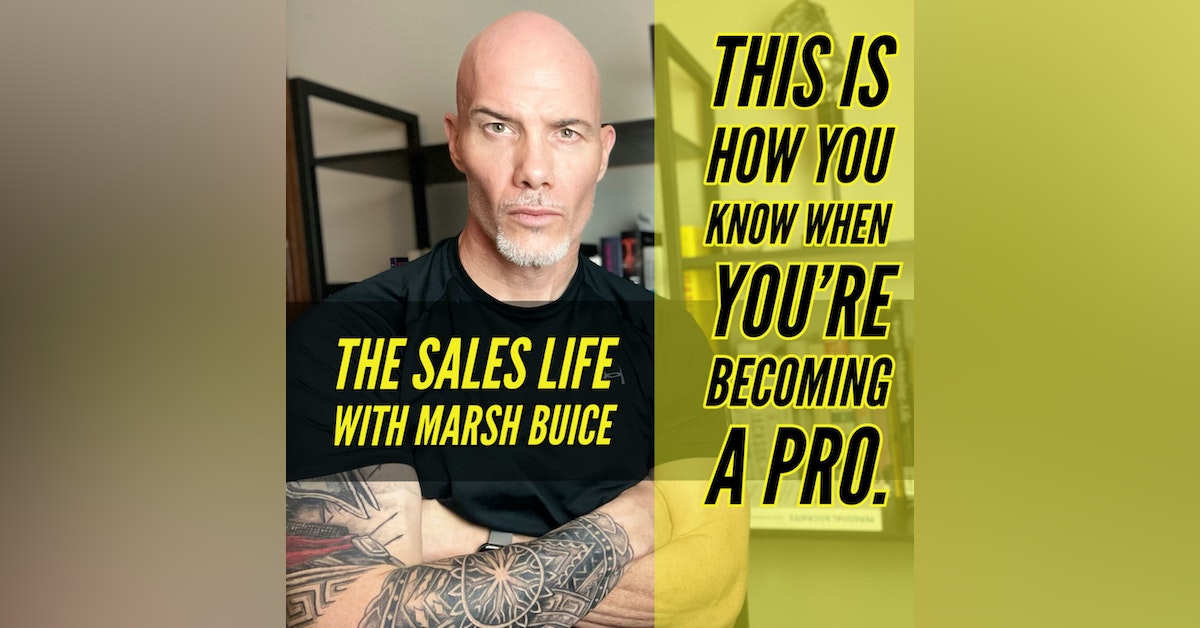 Foxworthy practiced his set until he had it precisely at 6 minutes, but there was one thing he didn't factor in, the audience's laughter and applause, which derailed his timing.

With cameras rolling, Foxworthy had to make an in-the-moment decision on which jokes to keep and which to throw out.

Welcome to the Sales Life. I'm your host, marsh B, and sales is a profession, but selling is a mindset that you need in order to embrace uncertainty, handle the adversity, and never settle again. In my 20 plus years of the sales profession, I've developed five disciplines that I've applied to every area of my life, including personal and professional disasters, hurricanes shortages, recessions, obesity, homelessness, demotion, and suicidal thoughts. I beat 'em all. Be ready for anything and achieve everything with the sales life mentality. Get started with your coaching today@marshbuice.com When comedian and Jeff Fox were the first got his big break on Johnny Carson, they told him, you have exactly six minutes to deliver your set. You don't have five minutes and 50 seconds. You don't have six minutes and five seconds. You have exactly six minutes. So Foxworthy began to prepare by writing his jokes, testing them out at different clubs, and he worked on his timing until it was precisely six minutes long. But one thing that he did not factor in was audience. Applause. He didn't even think about when he delivered a joke. That was so funny that the whole studio erupted in laughter and broke out in a round of applause. And it was in that moment when it, when everybody started laughing, he was like, oh my gosh, I did not factor this in because my set has to be exactly six minutes. And he said it was in that moment that I had to make some real time edits, some of the jokes I had to take out. But then also I had to start thinking which jokes went with the other ones to make the bodies of the joke perfect. And he nailed it. You know, when you're performing on Carson, when he invites you to the couch, that you did a good job. And that was the big break of his career. And that's how he knew he was becoming pro. But here's the symbolism for me. When you can make real time revisions and edits with additions and subtraction, and the other party doesn't even know that you're doing that inside, you're like, oh my God, you're freaking out. But you're able to process things and say, okay, I'm gonna keep this one and we gotta take this one out for timing purposes, or based on whatever the scenario is. That's when you realize that you're becoming a pro. . Now, the only way that you become a pro is through reps and experience. So the first thing is you gotta put in the reps, and that means it's not always gonna be sunny days and perfect skies. There are gonna be days when you don't feel like doing it. There are gonna be days when you're tired. There are gonna be days where you sit there and say, what's the use? You push yourself anyway because you've got to put in the reps and as you put in the reps, that's when you get the experience the experience is where you push yourself beyond your comfort zone. There are many times in sales, I'll bring a customer in, and I'm not even ready for 'em. I don't even know what they're buying. I haven't even sent into the bank. But I do it on purpose because I push myself beyond my comfort zone. That way when the voices inside or yelling out like Marsh, what are you doing? I silence those voices. I work my process, my external pace is really slow. My internal pace is super fast. I push myself beyond the comfort zone, push myself in those dark cloud days when I don't feel like it, I do it. So that way I can learn to make the edits. And first man, some of your edits are not gonna come out right. Sometimes they're gonna go over, sometimes you're gonna go under some things that you're gonna totally forget about and you're gonna blow the deal. You're gonna blow the sale, you're gonna blow the opportunity. That's okay. The good news is there's always next. I just put in another rep. So when it doesn't work right, I learn. I make the edits in my own life, and then I go get the next one and rinse and repeat, I do the same thing over and over and over again. As you do that, through the repetitions. You'll become more synchronous, and you'll be able to make these revisions almost without even thinking because it's just, it's just stuff you just drop in there. You. On the backside of it, you're like, fuck, man. I don't even know how I did that. The way that you did that is through the repetitions, through the experience, and that's when you know that you're becoming a pro. Remember, the greatest sale that you will ever make is to sell you on you because you're more than enough. Stay amazing. Stay in the sales life.