Make a damn decision! The only wrong decision is NO DECISON 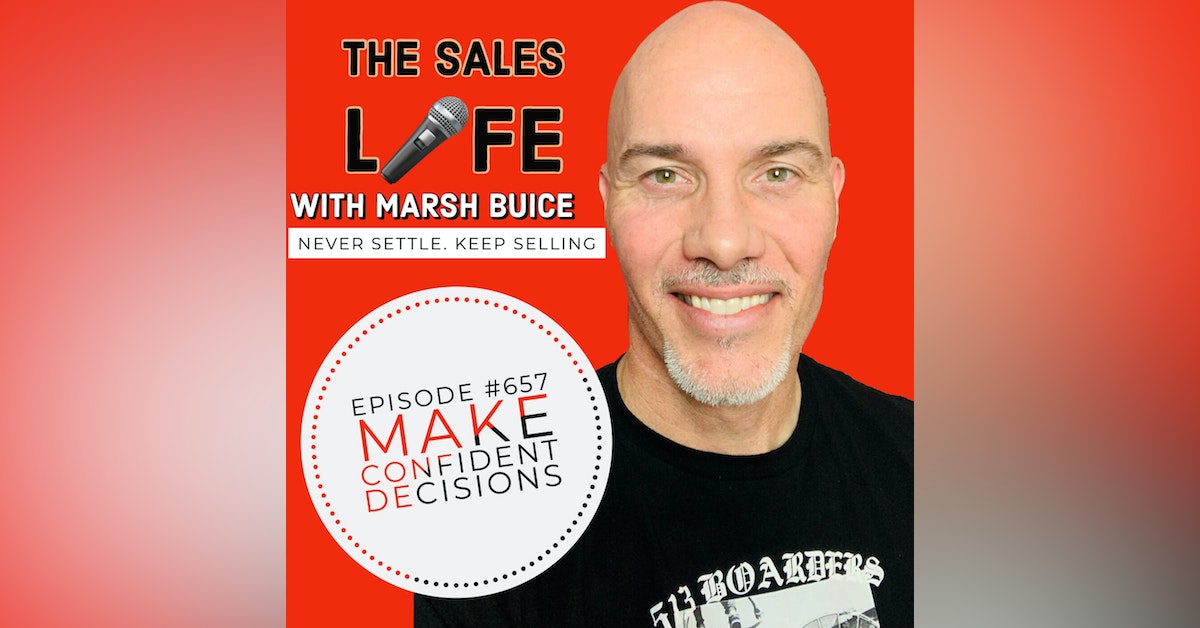 Early in my management career, I was told, "You can't teach decision making." That never sat well with me because babies aren't born good decision-makers, but as we grew older, we stopped making decisions because we quickly realized there were consequences. To avoid being grounded, whipped, or have our cell phones taken away, we did as we were told and little else.

So it is no wonder today, most people don't make decisions for fear of it being the wrong decision. With my newfound best friend book of the week, "Rework," by Jason Fried and David Hansson, I will help you develop the confidence to make decisions again.

To show your support and help grow the show, would you RECOMMEND The Sales Life to others?

📍  📍 Early in my management career. I was told Marsh you  can't teach decision-making and I never really bought off on that. It just never really made sense to me because toddlers don't make good decisions. But on the flip side of that, at least they made a decision, but as we grew older, We've got our hand slapped.

because of the consequences of the decisions that were made. So we just stop making decisions. And today, decades later, you find yourself. Unable to make decisions.

So today on the sales life using my new best friend book,  📍 the book rework by Jason fried and David Hanson,

you're going to start making some damn decisions. And I'm going to show you the benefits of making those decisions. So if you're tired of settling, we better get selling. Welcome  📍 to the sales life. 📍

📍 All right, TSL, let's get it.  One of my biggest pet peeves is when I asked my daughter Mackenzie a question and she hits me with the universal teenage answer. She shrugged her shoulders.

I don't know. So I asked the question again and I get the same answer. And I guess, you know, I really should tap into my inner sales skills and my sales spider senses to help coax an answer out, but I don't do so I get more intense. She feels the intensity and she shuts down.

We're scared. That what if it doesn't go in was just like a pool game. If it doesn't go in either get another shot or you play another game. So first thing, first learn to call the shot because making the call is making progress.

In the author's words, there's a rhythm to making choices. And if you get into the flow of decisions, then you're going to build momentum. And boost your confidence. And I want to put a pin in that thought right there. ,

You lose momentum because you park you park because you're only looking for things that are certain. It's gotta be certain, otherwise I don't do it. But think about that when you get super specific on only looking for a sure thing, you got no momentum because you're so locked into what you think and looking to not make a move until it's certain that you do nothing at all and you lose that flow of making choices, that rhythm of making decisions. See, I don't think there's such a thing as a bad decision. I think sometimes there are decisions that maybe were made that had the wrong timing to them. Or maybe you didn't account for something.  In either case, because you made a decision, now you can adjust the timing.

And if you didn't account for something now with that newfound knowledge, you can apply it moving forward. See many things,  you don't learn until you get the experience. How do you get experience decisions? Getting into a rhythm of making decisions?

The second key benefit in the flow of making decisions and the rhythm and making a choice. It's a rhythm, it's a beat as it builds momentum. It's also going to create confidence as well. And this is number two and three because number two is it's going to build confidence in yourself. You're going to develop that confidence.

But the third part is you're going to create others to have confidence in you.  Confidence is not because I make all the right decisions. Confidence is the ability to recover. When I make a decision.  Right.  I remember reading about a jazz musician and he says, I, I have confidence when I go on stage.

Not that everything's going to go. Right. But I have enough in my bag to recover when things go wrong. , this is where that confidence is built.  You develop that confidence because yes, some of the decisions that you make are going to be right.

You lose momentum. And then the one that you guess on  I'm a jump out on this one. It ends up being the wrong thing. See, this is why it's a flow. It's a rhythm. , it perpetuates builds momentum.

Why do you think so many people are drawn to Jeff Bezos? I mean, he looks like the smartest man in the world. He's one of the wealthiest people in the world because he makes decisions. And it's not because all the decisions were right. He will be the first one to tell you,

, I hope you get this because I want you to make better decisions.

Sometimes,  your decisions just have to be good enough. They do because the author's words, decisions are the brick and your foundation. So when you make a decision, you lay a brick

I live in a brick house. I don't think every one of those bricks on my house. Perfect there's probably a few bad bricks up there.

Same thing for you. When you make a decision, you're building that momentum. You're building the confidence, not only yourself, but you're creating the confidence that others have in you  and you lay in that brick and see that's when you can build a mansion  of success,  based on making those things because you can't build off of anything that you procrastinate on,

Make a decision, lay the brick build from there, recover, make the adjustment, keep rocking. So I don't want you to leave without applying something other than a handclap. To this episode.  So let's dig into the TSL toolkit for you. Here's how you make better decisions.

Start with lower-level decisions. Don't have to be big decisions. Start with a movie, a restaurant. Somebody says, what movie do you want to go to make a decision? Somebody says, what restaurant do you want to go? Make a decision. You probably got one in mind anyway, but you keep going back there. So to say it make the decision.

Even if it's something new, you didn't like the movie, you didn't like the restaurant. It's not the end all be all, but because you made decisions you can build from there and it creates confidence and other people are drawn to that. People don't want to do business with you. Even your family members, don't like being around you.

If you don't make decisions, just call the shot. Calling the shot is what's making progress.  Number two is when you're asked questions at work make the decision, you've got enough experience. They came to you for a reason, make the decision. Even if it's not right, you can recover.

And number three, this is interesting. I want you to think about this, pay it forward, help others make decisions. If you suffer from this  99% of the world, the one-percenters are the ones who just make decisions and they don't let the decision. Totally define them as good or bad. They don't define them.

They made a decision. Boom, go from there. You got to help other people make decisions,  when you ask people questions and you help them make decisions, it's going to actually.

Lift them up.  A lot of times people don't feel important in this world. They don't feel heard.  Because. nobody ask their opinion? They're told what to do, pay it forward, ask questions of others, help them make decisions. And sometimes the help is where you just sit there and don't make it for them.

And what will they do? It actually works back your way too, because you empower them because you lift them up. What does that do? Builds trust. It builds confidence it also creates a strong.

Sense of confidence that they have in you.

📍 Let me know how you progress is going on this.  I'm on all the socials @marshbuice  B U I C E. Sounds like BICE  but it's spelled like juice with a B in front. Are you can, uh, message me @thesaleslife1@gmail.com the sales life, the number1@gmail.com.

Before we get out of here.  📍 Would you recommend this show? To someone else, this will show your support show. You love. And also help grow the show because the number one way to grow is by you recommending it to someone else. Can't do it without you.

Your vote counts and I need every one of those votes. So if you would, that's your action item. As you start making decisions. I need you to decide to recommend the sales life to others as well. With that, remember the greatest sale that you will ever make is a sale you on you because you're more than enough.