645. "Did I win the decision?" Committing to ultimate results instead of celebrating today's effort. 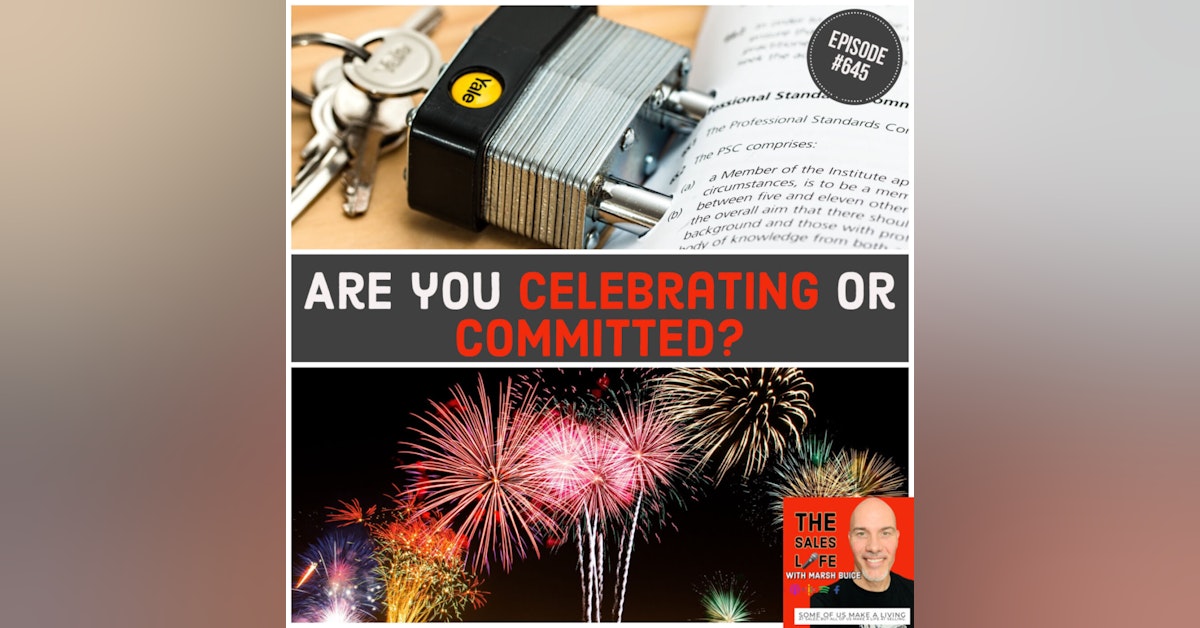 Will you celebrate or remain committed?

After you've put in 45 minutes at the gym or worked out every day this week, will you celebrate by overindulging in good food and rounds of drinks or will you remain committed to the ultimate goal of losing 50 lbs.?

After you've laid it on the line and had your best sales month ever, will you celebrate by taking the next month off or will you commit to becoming a top producer?

Tim Grover, author of the book, "W1NNING," writes, "...you compete for something every minute of the day with every decision that you make. 'Should I eat the donut?' 'Should I work out?' If you can't win these decisions, then you can't win at anything else. The right decisions take you closer to winning."

When you celebrate you have to hit the reset, but when you're committed, you're back at zero every day, compounding one win after another until the ultimate results are achieved.

If you're not getting the results you want, stop celebrating and recommit. Listen on to learn more.

SUBSCRIBE if you haven't already joined The Sales Life.

RATE: Short on time? Hit the ⭐️(Hopefully more than one) to cast your vote for The Sales Life Podcast.

REVIEW: While your waiting in line, will you take 60 seconds to let others know why you listen to The Sales Life Podcast? This will boost it to others shopping for their next listen.

JOIN: The Sales Life Group on Facebook to receive early releases of TSL.

THANK YOU for being a part of TSL 🙏

1 you add those things up and you get lulled to sleep and you stop competing and you stop winning in those decisions. This is where the all of the sudden overnight, oh my gosh, what happened? This is where you all of a sudden wake up and you're months, way off track. See when you lost it's because you celebrated. But if instead you'll delay the celebration because you're committed. This is how you win next obstaclewin the next decision. So when that push pull comes, get up, win that decision. When you start negotiating yourself, should I put in the work? Should I go work out? Should I run a mile? You can skip todaywin the decision and then you just go do it. And then in the moment you say, I won a decision, I didn't give my results back. And what I'm doing is, is you're compounding, you're building on top of it. And you're layering in commitment, commitment, commitment, commitment, every single day, dude, because you're back at zero. Yesterday ended, man, all the, everything, all the hard work you put in is over that counted for yesterday. What counts for today? You're back at zero and I will not all the work I've put in. I will not give all those results back and hit the reset button. Zero and reset are not the same reset means you are back at square. One zero means you put yourself back at work. And you earn the one because I'm competing and I'm looking not in the immediate moment of celebration. I'm willing to forego, the, the immediate celebration, the pats on the back, the claps I'll forego all that. So that way I can achieve the ultimate victory. . This is so important for you, man. You've got to think about this stuff did I win that decision? If I lost a celebrated, let myself off the hook reengage, but boy, it's a great feeling when you win the decision and you say, I almost caved into those urges, but I didn't. I won the decision. What's next. Grab a copy of this book, man. I'm not giving it any justice as to the power and the magnitude. Thank you so much for pressing play. Thanks for being a part of the sales life. Remember the greatest sale that you will ever make is to sell you on you because you're more than enough. Stay amazing. Stay in The Sales Life.