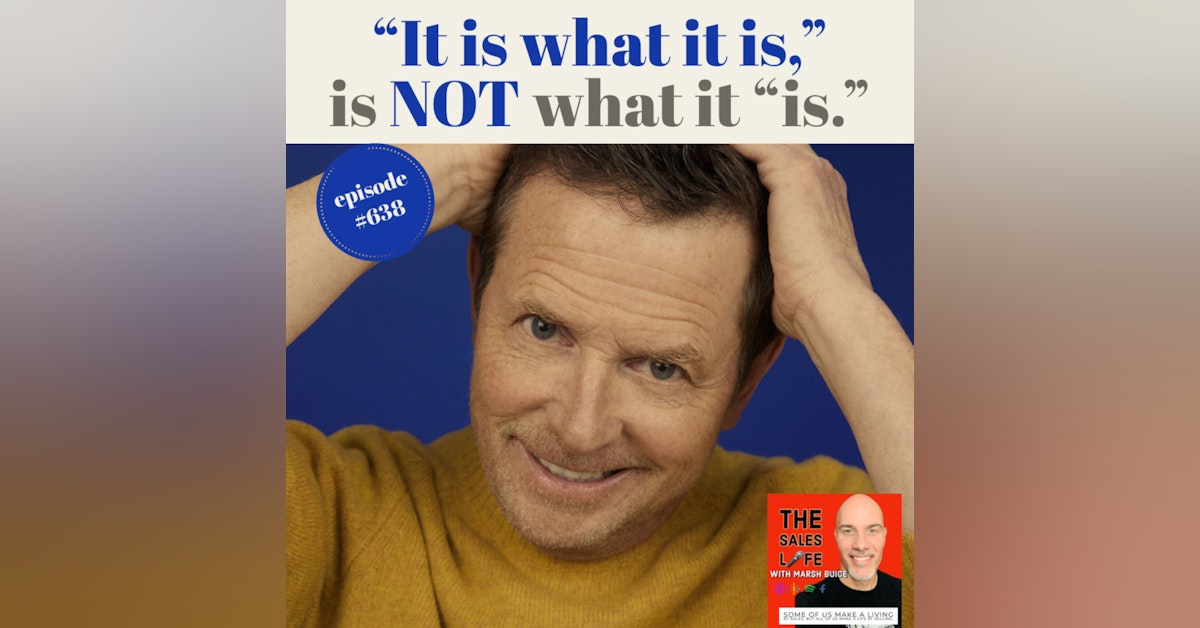 "It is what it is." I hate that phrase, because the statement makes it seem like that you're giving up...unless you're Michael J. Fox. The 80's phenom actor has been battling with Parkinson's for over 30 years. How does Fox deal with not being able to press the buttons on his phone or suddenly fall down?

He told Men's Health Magazine, he deals with moments like this by saying, "It is what it is."

But it is NOT how you think.

After hearing today's episode you will never think of, "It is what it is," the same.

All right, TSL. Let's get it. Welcome to another episode of sales life. I am your host Marsh, Buice, recently, Men's Health M agazine interviewed, , phenom act back in the eighties, man. Let me date myself. Uh, family ties. Michael J. Fox. And Michael J. Fox has been dealing with Parkinson's for over 30 years. And when the writer for men's health magazine, they asked him, they said, "If you could go back in time and choose to not have Parkinson's, would you do it different? Would you not have Parkinson's?" And Michael J. Fox said, , "No, I wouldn't change anything. Is that, I know it sounds crazy, but you have to understand, the stuff that you plan and the stuff that you work towards. And the stuff that you aspire to, your desires, your wishes, your hopes, and then there's things that just happen. And the things that just happen in your life are of a more intricate design of a higher purpose. Then what you could ever come up with." This is what Inky Johnson calls his podcast, Serendipity. And those of you who follow motivation, you know, Inky Johnson and Inky was a NFL hopeful. He was the saving grace to get his family out of poverty. Yet with a freak accident, it almost ended his life, but it ended his dreams of being an NFL star. And he said, the question I'm often asked is what I go back and change anything. The fact that I'm paralyzed and have no use for one of my arms, what I go back and what I changed that moment. He said, no, I wouldn't serendipity. Because see what looked like the worst moment in his life. What looks like the worst moment in Michael J. Fox, his life, there's a more intricate play here. And there are things that you have no idea what the worst moments are setting you up to be some of the best of your life. So, how does Michael J. Fox dealing with Parkinson's? How does he deal with falling down? Unexplained just falls down when he can't push the buttons on his phone, normal everyday, things like that. You and I do. How does he deal with the fact that he needs help? And oftentimes can't help himself. You know what he says, "It is what it is." And I've never been a fan of that. I've always hated that phrase. It is what it is, but see, he looks at it different when he can't do those things. He normalizes the uncertainty. And the things that he can't do, he says they're just moments and he normalizes the moment, but he doesn't make it a monument. See, it is what it is for him, which he should be for you. It's not about giving up. It's about normalizing that it's just a moment and you make the necessary adjustments along the way. I've always hated that phrase. It is what it is because instead of normalizing the moment and making the necessary adjustments. We become accepting and we treat it as permanent. It is what it is. I think sometimes we take life too serious? We take the moments as too permanent and we look at things as what is. It's what is, but it's not all there is. It's simply a moment. And I want you to understand that. It's what, one of my favorite books, Nina Sossamon-Pogue, she says, and her book is amazing. This is a woman who has been through many, many difficult situations. And she calls them "THIS" moments, and the, THIS moment seems like the worst thing there is, but she says one thing, even in your lowest, darkest times, there was a, this before the moment. And there will be a, this after the moment you got to keep showing up. So when you fail when you fall or when you feel like an idiot, go ahead. Say it, it is what it is, but say it not to give up, but to make the necessary adjustments and move on. Because there are things at play unseen things, unseen forces that are working on your behalf and they're deeper and more intricate than you could ever think of. So when you're in those moments, it is what it is. It's just a moment. Make the adjustments and keep rocking. Remember the greatest sale that you will ever make is to sell you on you because you're more than enough. Stay amazing. Stay in the sales life.