Don't believe everything that you perceive. | Apply proportional thinking to your life w/ Damon West 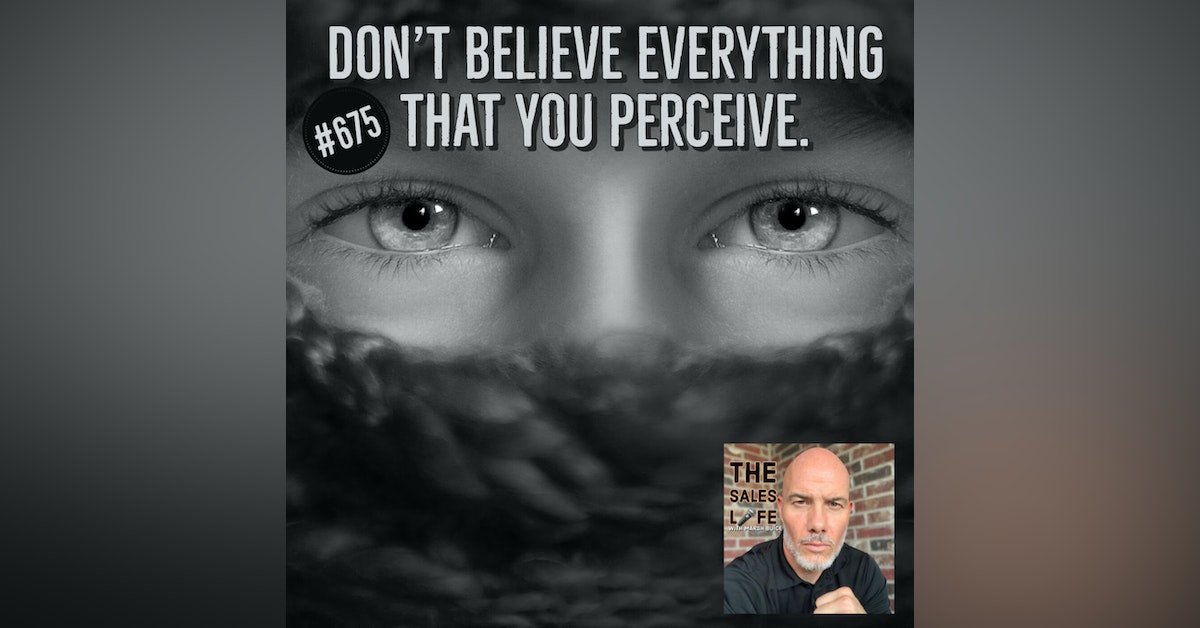 Imagine your perception if you were serving a life sentence? Damon West, author of "The Change Agent: How a former QB sentenced to life in prison transformed his world," could've looked at his life sentence and accepted it, but today he is a free man traveling all over the world with thought leaders like Jon Gordon.

Instead of getting through the day, West got from the day through proportional thinking.

Today, I'll show you how West applied proportional thinking to free his life and how you can too.

Thank you for listening. Watch this episode on YouTube. For more go to www.marshbuice.com

You know, perception can really Jack you up because when it's bad and it looks like it's going to stay bad, but also when it's good, well, that could lead to bad because you get comfortable. You're listening to the sales life, a top 5% podcasts in the world. I'm your host, marsh, Buice learn, how to sell your way through life. Because selling is not just a profession, it's a life skill. So, if you want to have more, do more, be more then say no more. Let's get on with today's episode. And it comes from Damon west book. The change agent, how a former quarterback sentenced to life in prison transformed his world. It's an amazing comeback story. This guy was sentenced to life in prison, and today he's out there touring the world with John Gordon and so many other thought leaders in the book, Damon west wrote many in jail don't have a chance because they have a problem with perception and proportion perception makes daily life difficult to discern in a place like prison because you're surrounded. Bye con artist in liars. And because of perception, most people accept their environment and they just give up. but west did it different, instead of. Just getting through the day he set out to get from the day, most of those in prison, they did just enough to just get through the day. But Damon west squeeze the juice out of every single day. He wanted to get everything he could from the day. So we worked hard on his mental and his physical and his spiritual health. He used everything that was right around him. Every bit of resources that were available, even if it didn't look like much, he used it, he worked in proportion and he took one day at a time. Proportion is your key. To growth because you can't do it all at once, but you can do it once all the time. It goes back to the saying, how do you eat an elephant one bite at a time Damon west often repeated do your time. Don't let time do you, and for you. Maybe you're in a toxic situation right now, or maybe you're at a job that you hate or work for someone that is just an idiot and many people will tell you, well, you know, just leave, go somewhere else. But you've got an obligation. I can't just do that, but just because you're in that environment right now, and maybe you have to do your time, don't let the environment, don't let the time that you're in. Do you meaning that you don't have to accept and act like that environ? Don't let perception color. What is is all there is. See Damon west was locked up in prison, but his mind was free to move about the world. So it was yours. So you got to work in proportion, you got to work in chunks, not all just next. What's one thing that you can do to improve your situation. Can you learn for 30 minutes throughout the day? Can you pick 30 minutes to listen to a podcast, to watch a video, to read a books, what I call gap learning. And so on your way to work, when you go to the top of the stairs, when you're walking to, to the mailbox, can you fill in the gap? And learn something, even if it's a passage, even as if it's for three minutes. See, so oftentimes we think that we have to segment this block of time. No, just a tiny sliver, sometimes just a few minutes. Sometimes when customers are waiting to connect with me on zoom, because I'm about to work with the next customer virtually while they're waiting to get on I'm gambler. I'm learning something. I'm reading a passage from a book. I may get five words in, but it's five words, more proportion thinking. When you get home at night, can you take a walk in the evening and the hell, dude, I get the fact you want a beer? When you get home? Fine. Take a walk witha beer. That's proportion thinking like for me losing weight, the proportion was showing

00 AM, every single day and because I worked out that day, I ended up eating better throughout the day because I didn't want to give my results back. When I created the sales life podcast, five minutes, every single day, that meant that I had to write two pages. One page on a legal pad was two and a half minutes long. I learned that. So I realized that I could share content in five minutes. I had to write two pages, but see it forced the learning. It forced me because I knew I had another episode coming out. It forced me to learn. And not only did I make another episode, but I applied it to my everyday life. My life at the time was terrible. I was triple broke. I was five inches away from won't end it all, but every day, proportion one bite. Next step. Boom, boom. When I got demoted, I had to apply proportional thinking it all looked bad. If I was left to perception, it all looked bad. But when I applied proportion, I didn't. I didn't look at all. What do I have in here? What can I learn? Start with what you have work to what you need, get to what you want. First thing I had to do after I put my ego aside I had to learn that department again I hadn't worked in that in almost 20 years, everything had changed. Boom proportion what I need to know what I need to learn. I didn't wait to be told. Just took stuff on every single day. I didn't know where it would lead. I didn't know where it would lead to where I am today. I just applied. But here's the thing, perception is not just for bad environments perceptions also for good environments to, because it'll jack you up. It'll make you get complacent perceptions, like carbon monoxide, it's odorless. You don't feel anything. You just drift off and with success, you think that it's always going to be good. You think that you're untouchable? So. You start doing a little bit less, you celebrate a little bit more, and this is what leads to disaster. So see, just like you applied proportional, thinking to your tough situations, you also apply proportion when you're doing good as well. And this is where you punch at it every day. It's about to tell myself, punch at your health every single day, punch at your creativity every day. You behave your way to success. I just read getting to neutral Trevor Mowad's , new book, and this applies to proportion thinking because neutral setting is not forward or backwards, right. It's neutral, meaning that. It's got nothing to do with the past, and it's got everything to do with what you do next. If the past was bad. If the past was great, neutral, next to don't let perception be the overriding factor in your life where you give up or you get comfortable. Proportion lay the next brick I'm pulling for you. Go to marsh, bice.com. That's M a R S H B U I C E. Spelled like juice. Whether it be in front, and right there, you will find the mic from you to me, let me know how your progress is going and what I can do for you. I'm no hair, but I'm all ears. While you're there, there's a thousand free resources from videos to blogs and of course, episodes as well. That way you can never settle and keep selling your way through life. Remember the greatest sale that you will ever make is the sale. You won't, you stay amazing. Stay in The Sales Life.